No. Not a new dipping sauce from President's Choice, but rather, the fairy tale. 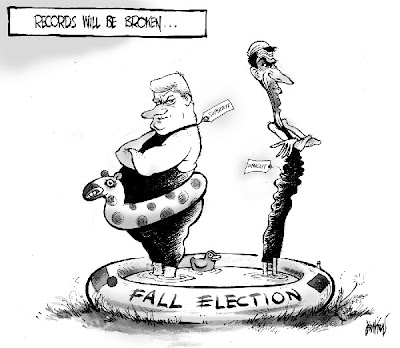 There once was this leadership campaign way back in 2006. It had bravado. It had the best talent in the country. It could raise money in a single email drop. It had ideas. It couldn't lose.

Then, during the summer months, the candidate disappeared. The media became annoyed -irritated even - that this candidate would just void himself from the playing field amidst world crisis and such. MANY a good blogger tried to keep the momentum up. But they weren't the MSM. The candidate's team sent mixed messages daily to the MSM. There was no real messaging. The candidate was rather silent.

THEN BOOM!!! Outta nowhere, in the fall, comes the campaign relaunch! THE NATION version. All wrapped up in a cosy little novel-like red book. A party was held in downtown Toronto to much fanfare and media coverage. Shortly afterward, at a cosy get together at HY's sounds of "we won", "we won", "it's in the bag" could be heard over some fairly expensive wine and scotch.

In the end though, we all remember the screams of despair on that winter day in Montreal December '06. Heard over breakfast the next day: "how is it possible?", "what went wrong?", "this is like a bad dream".

Fast forward to 2009. Same players. Same strategy. We'll release our platform (maybe) in September. We'll have some ideas then. As though to say "history has no bearing on the future", and, "we got this one covered". The similarities are quite shocking to those studying the game really closely.

But even when Liberal friendly journalists are pointing out the obvious, will anyone in Ottawa be savvy enough to listen?

I leave you with Adam Radwanski. Somebody should REALLY LISTEN to his message.

"Then you make the mistake of thinking that your average voter - who doesn't have the same vested interest, and isn't immersed in the government's day-to-day foibles - feels the same way."

If you didn't dump Dion he would be the PM right now. A coalition government but so what. Now it won't happen for years.

I certainly did not dumpt Dion.

And, yes, he would be Prime Minister as we speak. That wasn't important to our party apparently.