Unless of course you live in the Halton riding.

I thank some kind individuals who were nice enough to email me with some contested nomination info.

Dr. Stan Kutcher and Chris Cowell will be duking it out. No word about whether or not friend of a friend Catherine Meade (ran in '08) has decided to enter the fray.

To be contested: Pontiac and Gatineau (where former party national director Steve MacKinnon will be running for the nomination)

My friend Jennifer Pollock has apparently won the right to run against Rob Anders again.

How to Piss off Your Other Candidates and Caucus Members

Thank you Mr. Oppal for telling us all how important you are to our party. Good to know that Marlene Jennings and Irwin Cotler won't be in the running for the job. Nor will the likes of other party elected lawyers like Dryden, Hall Findlay, Maloney and the likes.

Tim Powers makes some interesting observations along the lines of what I alleged on Saturday. My question is which of the other 278 candidates for the party have been told that they are NOT cabinet worthy?

As I said, there's a few realities that some people have to come to terms with. One is that leadership is over and it's high time that someone told the kids that so that they can begin to shape a plan for a Liberal vision of Canada rather than worrying about A) a leadership race that doesn't exist and B) patronage of fellow supporters across the country.

Hey, what do I know?

The Liberals Don't Have a Plan

I consider John Mraz a friend - an intelligent one at that. John's seen his share of battles in Liberaland. A veteran and seasoned pro by all accounts and a top notch writer.

His article in the Post reflects on some realities that, perhaps, the OLO doesn't want to hear. I say that's too damn bad really because if John's writing about it, he's heard from the deep grassroots and the top brass alike. He has that kind of range.

So when a guy like Mraz is giving a subtle hint to get off your ass and get a plan, chances are many, many others in your party are saying the same thing.

In other words, Michael Ignatieff (ergo all the Liberal Party) has yet to define himself with his own plan and thereby is being defined - a la Dion - by the Conservatives. This is what Mraz seems to be harping on. Can't say I haven't heard that in several regions of Ontario over the summer. I'd be lying if I did.

Our leader has become invisible in just under one month, and I'm not sure that is a good thing when you threaten for a fall election.

Speaking of elections. Has anyone seen or heard of a contested nomination fight in any one riding across Canada yet? If so, send me an email would ya.

Heard at Dinner: "Worse than the Martinites!"

John Napier Turner gave an aggressive and instructive speech out at the Liberal Leadersh...er, Policy Convention in Vancouver in May.

It was a scathing bit of reality that most in the room had to come to terms with but some were in too much shock at the moment. Some of us had already come to terms with it as long as 5 years ago or more. Heck even the current Liberal War Room guy use to write about the atrocities of the internals of the party.

But hey, that was sooooo two months ago. Back to business as usual. You know, the business of discouraging candidates and not allowing open nominations for EVERY riding(anyone hear of a riding named Halton?). You know, that sort of thing.

Sure, sure you say. He's a whinny bastard isn't he? Well NO. See, many of us real grassroots-type people have been whining about the same old, same old for over a decade or more. John Napier Turner knows that. He knows that and wasn't afraid to tell the world in an open media forum.

Here's the problem: the guy seated to his right wasn't paying attention. If he was paying attention, he would have maybe remembered the promise he made to 14 of us in a little Indian restaurant in downtown Hamilton, Ontario on a damp night in February of 2006. The promise that this sort of bullshit in the party would stop.

Worse than the Martinites? I'm not sure that would be a compliment.

The Queen Names Jean Chretien to Order of Merit

Quite the honour for the greatest PM in the history of Canada. Given that there are only 24 living members that have the Order, I think this is a pretty big deal....even for Mr. Chretien.

Posted by James Curran at 7:18 PM No comments:

Conservatives Decide to Give Grit Girl A Run 4 Her Money

Republicans for Ignatieff is the new form of Conservative attack ad being launched today.

A pint o' beer to whomever finds out the identity of those behind the site.

UPDATE: Kady already covered this story. most think it's none other that Stephen Taylor.

When a Wafer Becomes a Political Tsunami

Many have written about the PM's huge faux pas at the funeral mass of Romeo Leblanc, whereby said PM was rumoured to have "pocketed" the body of Christ. Some are outraged. Some are making political hay from it. And some are outraged by the outrage.

I have long held the opinion that the Liberal Party's fortunes have, for a great deal of decades, been tied to the Roman Catholic Church. Some have argued and debated with me that it's simply an east and west thing when it comes to political fortunes. Those of you that have known me for any length of time politically would know that one of my pet theories is that the Liberal Party has continually been successful in Ontario, Quebec and the east coast because of the presence of the Catholic Church in those regions.

Lately - and especially with the election of our latest Conservative pope - the Conservatives have been able to sway some of that Catholic vote with their anti-abortion, anti-gay marriage agenda that plays to the Pope Benedict/Rob Nicholson type Catholic.

Let's have a look at some blatant material evidence. Canada's population is housed with 46% of the population that is identified as Catholic (2008). An additional 36% is protestant. Of the 72 diocese in Canada, only 13 can be found on the prairies. 8 of those are located in the cities of Winnipeg, Saskatoon, Regina, Calgary and Edmonton.

My point? The strongholds of the Liberal Party are also the strongholds of the Catholic church. There's some wacky correlation attributed to it. So what's the big deal about his Royal Commander in Chief, Stephen Harper pocketing a little biscuit? The deal is 14,000,000 Canadians probably wouldn't believe it's right that he didn't eat the host. Moreover, the 1 billion Catholics worldwide would probably also be offended. It's not like it was a seal heart or something.

While I don't pretend to know the ceremonial do's and don'ts of every religion in the world, I would suggest to you that if I didn't know what the protocol was for a ceremony I was attending (especially as high a ranking one as this), I'd make damn sure I asked.

Thousands of non-catholics attend mass weekly (Notre Dame in Montreal to name one) at at least one of the almost 5,000 RC parishes across this country. Most would know to sit in their seats at the time of communion and let those in your pew pass by you to receive communion. Heck, as Catholics, some of us were taught as kids not even to receive communion without receiving confession prior to.

So yes, to 14,000,000 Canadians, it probably does matter whether or not the PM ate the host. And, yes it is a big deal. That's the thing about Harper. He doesn't care to learn about Canada or Canadians. 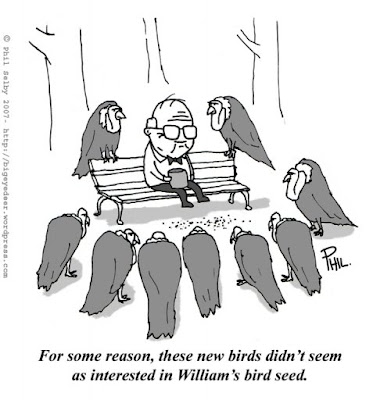 Sarah Palin is Stepping Down

You just knew it was going to happen.

Posted by James Curran at 6:39 PM No comments: