I know they're hard to see in this picture, but trust me, there were a lot of smart looking horses the day this picture was taken. 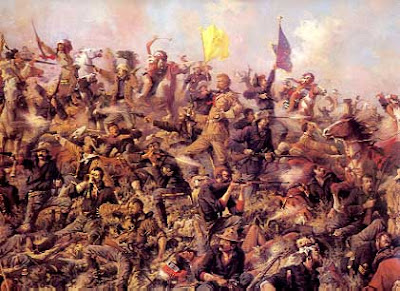 George Armstrong Custer (December 5, 1839 – June 25, 1876) was a United States Army officer and cavalry commander in the American Civil War and the Indian Wars. At the start of the Civil War, Custer was a cadet at the United States Military Academy and his class's graduation was accelerated so that they could enter the war; Custer graduated last in his class. He served at the First Battle of Bull Run and was a staff officer for Maj. Gen. George B. McClellan in the Army of the Potomac's 1862 Peninsula Campaign. Early in the Gettysburg Campaign, Custer's association with cavalry commander Maj. Gen. Alfred Pleasonton earned him promotion from first lieutenant to brigadier general of United States Volunteers at the age of 23.[1]

Custer established a reputation as an aggressive cavalry brigade commander willing to take personal risks by leading his Michigan Brigade into battle, such as the mounted charges at Hunterstown and East Cavalry Field at the Battle of Gettysburg. In 1864, with the Cavalry Corps under the command of Maj. Gen. Philip Sheridan, Custer led his "Wolverines", and later a division, through the Overland Campaign, including the Battle of Trevilian Station, where Custer was humiliated by having his division trains overrun and his personal baggage captured by the Confederates. Custer and Sheridan defeated the Confederate army of Lt. Gen. Jubal A. Early in the Valley Campaigns of 1864. In 1865, Custer played a key role in the Appomattox Campaign, with his division blocking Robert E. Lee's retreat on its final day.[2]

At the end of the Civil War (April 15, 1865), Custer was promoted to major general of United States Volunteers.[1] In 1866, he was appointed to the regular army position of lieutenant colonel of the 7th U.S. Cavalry and served in the Indian Wars. He was defeated and killed at the Battle of the Little Bighorn in 1876, against a coalition of Native American tribes composed almost exclusively of Sioux, Cheyenne, and Arapaho warriors, and led by the Sioux chiefs Crazy Horse and Gall and by the Hunkpapa seer and medicine man, Sitting Bull. This confrontation has come to be popularly known in American history as Custer's Last Stand.

Thanks for the link, which I have joined. We need to go now, but I don't Dion is taking the bait:(